Thank you everybody. Our campaign is now over. ✕
Ride to Give - A Hyperbaric Chamber for Halie
✖
Gallery (1) 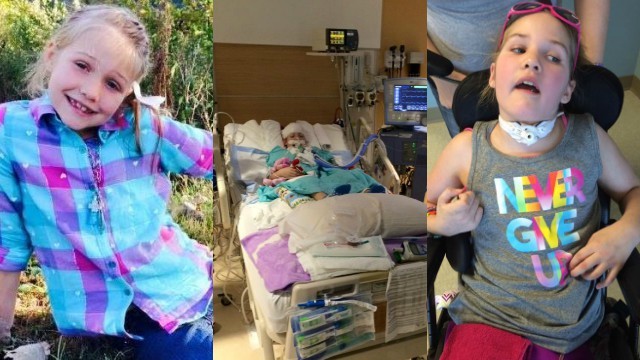 Halie Bays of West Portsmouth, Ohio was diagnosed with Type 1 Diabetes when she was just four years old. Now age 9 and in second grade, Halie was happy, active and well adjusted to life with diabetes. She loved to played outside with her younger brothers Isaiah and Braden, rode four-wheelers, enjoyed camping and swimming, and was an avid cheerleader. But in December, all that changed in the blink of an eye.

On December 20th, Halie came down with a sour stomach which her parents figured that was the same bug her brothers had had the week before. After being up all night, Halie’s blood sugar was over 500, not uncommon when she is sick, but to be safe her mother Kandi decided to take her to the local ER for IV fluids and insulin. Kandi became worried when the IV emptied too quickly, and shortly after Halie had a seizure. She was immediately transferred to a larger hospital, where upon arrival she coded twice just minutes apart. Halie's doctors were able to bring her back but not before she suffered extensive brain damage due to lack of oxygen.

Between walking into the ER and being transferred, something went horribly wrong. Doctors said it looked like Halie’s blood sugar dropped too fast in the ER, and her body had been unable to adjust quickly enough.

Days turned into weeks and after almost two months, Haile was sent home in a mostly vegetative state. The Bays were told not to expect much improvement, but they refused to give up hope. After doing research, they read that Hyperbaric Oxygen Therapy (HBOT) could help heal the brain after a traumatic injury. It only took one visit to the HBOT center to see a startling difference.  The day after her first treatment, Halie finally opened her eyes and she is now able to follow simple commands, move her arms and legs, and breathe on her own.

Sadly as Halie's brain continues to awaken, she has become increasingly agitated, especially in the car, making it harder for her to endure the two-hour drive to the HBOT center. The effects of Hyperbaric Therapy are cumulative, and missing treatments are not advised. Recently Halie's family began fundraising to purchase a chamber of their own because they were denied by her insurance company; however, they are still far from their goal.

After reading Haile's heartbreaking story, Ride to Give has offered our support. We contacted Hyperbaric PHP in Buford, Georgia, the same company that helped the Halstead’s, and they suggested the Vitaeris 320 by Oxy Health. This is the same "rocket" Tripp has and is safe and easy for use in the home. Please help us give the gift of continued healing for Halie by making a tax-deductible donation to Ride to Give.

Also, you can follow Halie's road to recovery by liking "Prayers of Halie" on Facebook.
Contributions are solicited with the understanding that the donee organization (Ride to Give, 501c3 tax ID 46-2952297) has complete discretion and control over the use of all donated funds. Questions about how your donation is used can be answered by clicking here.  Please visit Ride to Give on the web at www.ridetogive.com or on Facebook at www.facebook.com/ridetogive.