Thank you everybody. Our campaign is now over. ✕
Ride to Give - A New Floor for Holden
SubscribeUnsubscribe
✖
Gallery (1) 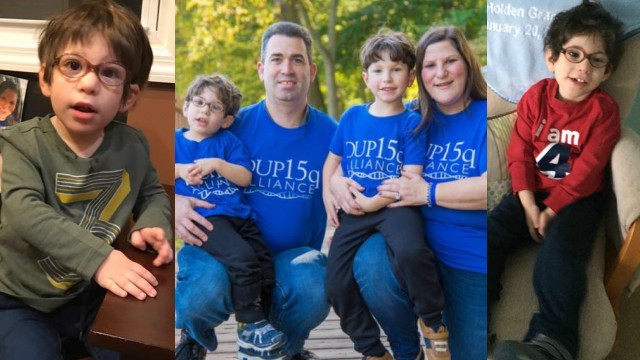 Four years ago, Lauren and Marc Weissberg of Springfield, NJ welcomed a second son, Holden, into their family. As an infant, Holden slept well at night, was quiet and wonderfully content; the complete opposite of his big brother, Reid. His parents assumed that after two years of lost sleep with their fristborn they were finally being given a gift. They often described Holden as being chill, with his serious demeanor and love for cuddling.

Although they were careful not to compare their two sons, Lauren and Marc could not help but notice that Holden was not reaching his developmental milestones.  They shared their observations at their well-baby visits. However, Holden’s pediatrician never seemed concerned.  As his 1st birthday approached, Holden was still not meeting his milestones, and it was recommended to wait three more months before being referred for an evaluation.  When Holden turned 15 months and was still not crawling or pulling himself up to stand, he was given a referral for a full Physical Therapy evaluation.

At 17 months old, after his PT evaluation, Holden was diagnosed with hypotonia, a decrease in muscle tone. Holden's therapist, Dr. Nicole, recommended that they call Early Intervention (EI) for an evaluation and they soon learned that Holden had global developmental delays and qualified for OT, PT, Speech, Vision, ABA, and Developmental Intervention.  As parents with full-time jobs, Lauren and Marc wondered how they were going to integrate all of the new therapies into Holden's life. Thankfully, the fabulous owners and teachers at his daycare we were able to work everything out. Holden spends many hours of his day working tirelessly to improve all of his skills.

Approximately three months before Holden's second birthday, the Weissbergs learned that he had a chronic fluid problem in his ears that had caused hearing loss, so tubes were prescribed.  Fortunately, all of his hearing issues stemmed from the fluid, but now Holden needed to learn to hear and communicate after 22 months of not being able to do so. Slowly his parents were getting a handle on all Holden’s therapies, but still had more questions about his health than answers.

Dr. Nicole then recommended that Holden see a physiatrist and a neurologist. Thus began months of poking and prodding, MRIs of the brain, and endlessly waiting for phone calls from specialists with results. In December 2015, they were told Holden's MRI was clear. They were relieved, assuming everything was fine and that Holden just needed time to catch up.

It was also recommended that the Weissbergs see a geneticist. They were not expecting anything to come up because the geneticist said it's extremely rare that you find something in the first round of testing.  While they waited for the genetic results, the neurologist diagnosed Holden with Cerebral Palsy.  While they emotionally tried to come to terms with what this would mean for Holden and their family, they pushed for as much therapy as they could get to give him the best possible chance to thrive.

Just as they were starting to accept Holden’s CP diagnosis, the genetic testing results finally came in. At their appointment in May 2016, the Weissbergs learned that Holden had an isodicentric duplication of his 15th chromosome and was formally being diagnosed with Dup15q syndrome.

Dup15q syndrome is a neurodevelopmental disorder, caused by the partial duplication of Chromosome 15, which confers a strong risk for autism spectrum disorder, epilepsy, and intellectual disability. It is the most common genetic cause of autism, accounting for approximately 1-3% of cases. There are only about 1,000 people with Dup15q.  The disease is not well known or researched, and to date, there is no cure.

In November 2016, Holden was diagnosed with Autism Spectrum Disorder, Sensory Processing Disorder, global developmental delay, and mixed expressive, receptive language disorder. In December 2016, Holden was deemed eligible for special education services under the “preschool child with a disability” category and began a full day program in January 2017. He has been attending school for a year, and his parents continue to see small, but forward moving progress.

Holden was and continues to be, the hardest working person his parents know.  He tries so hard in all of his therapies and truly has the heart of a champion.  It is hard for doctors to really know what Holden's future will bring, but it’s safe to say that Holden will never be able to live independently.  Currently, Holden’s developmental age is that of approximately a two-year-old, and the odds are that he will not function beyond the abilities of a 5-7-year-old.

The Weissbergs are working parents balancing full-time jobs and raising a family while coping with the challenges of raising a special needs child. They work very hard, and they spend all available funds on therapy and childcare, as they cannot leave Holden without a trained professional. Holden is not eligible to use their public school before/aftercare, which is substantially less money than hiring a private sitter.  As with so many of our RTG families, the Weissbergs pay out of pocket for some therapies, plus diapers, and other items.The one thing the Weissbergs want most is to improve their home and make it safer for Holden.  The first thing on their list is to make their main level all the same flooring.  Currently, there are multiple types of flooring that pose a tripping hazard for Holden.

This is where Ride to Give steps in. We would like to pay for the removal of their old flooring and have laminate flooring installed. This will provide Holden with the smooth flat surface he needs safely move around the house. We can't wait to see Holden walking from room to room, but we need your help to make this simple home makeover a reality.

Contributions are solicited with the understanding that the donee organization (Ride to Give, 501c3 tax ID 46-2952297) has

complete discretion and control over the use of all donated funds. Questions about how your donation is used can be answered by  clicking here.