Thank you everybody. Our campaign is now over. ✕
Ride to Give - Supporting Hudson Strong
SubscribeUnsubscribe
✖
Gallery (1) 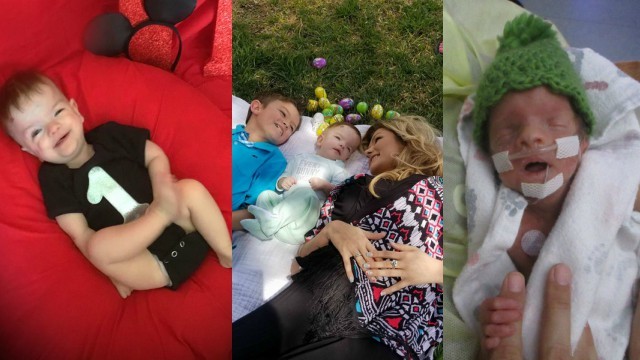 At 30 weeks pregnant with her second child, Megan Price of Wink Texas was admitted to her local hospital for severe dehydration. Her doctors ran many tests on both her and the baby, and she was shocked when her doctor told her that son's kidneys looked dilated and wanted to see a specialist immediately. The next day she went to the specialist thinking it would be no big deal as babies have these problems all the time. Sadly, that was not the case. The specialist told her to sit up and hang on and then she heard words that will always be on repeat in her mind.

"There is something seriously wrong with your baby. His cord isn't working properly, he has a clover leaf shaped head, he's missing parts in his brain. He is only 2 lbs and the list goes on... his kidneys are the least of our worries. We are admitting you now."

Megan was 8 weeks away from delivering what she thought was going to be a healthy little boy. She had been told for 30 weeks that he was fine and growing perfectly but now she was being admitted and after 3 weeks of close monitoring and bed rest, Hudson was born via c-section. He was 2lbs 9ounces, 16 inches long, and immediately he was rushed to the NICU. It would be 24 hours before Megan was able to see her baby son and she was instantly in love.

Hudson is the only child reported in Texas and the 3rd reported case worldwide with this specific deletion. He was in the NICU for 3 months, 2 months in West Texas and a month at Cooks Children's Hospital in Fort Worth. This was an extremely difficult time for Megan, a single mom, as she was not only scared for Hudson but hated being so far away from her older son Hunter.  After over three months away, Megan was very excited yet unbelievably nervous to bring Hudson home and become a real family of three.

Durning his stay in the hospital,  Hudson had 2 blood transfusions, countless test, and procedures, a G-tube placed and tethered cord release surgery. He was also diagnosed in his first year with a long list of disorders linked to his chromosomal deletion:  Agenesis of the corpus callosum, Central Apnea, Choanal Atresia, Craniosynostosis syndrome, Ectopic testis, Moderate hearing loss both ears, Hydronephrosis, Laryngomalacia, Microcephaly, Neuromuscular scoliosis, Ptosis of left eyelid, Reflux, ROP, Right sides nasal stenosis, Tethered Cord, and most recently seizures. He has been scheduled for his first EEG and hopefully, within the next week, Megan will have some answers about his newly started seizures.

In the future, doctors expect Hudson to have more procedures... Eye surgery to fix muscles, nose surgery to remove tissue clogging right side nostril, kidney surgery to fix the reflux, surgery on his testis, and a possible shunt placed if the soft spot on his skull keeps growing instead of getting smaller. Because Hudson's chromosomal deletion is so rare, doctors at Cooks Children's Hospital are learning as they go as they have no medical history to work from. He has no definitive prognosis and they take each day as it comes.

The biggest concern for Hudson right now is reshaping his skull to better protect his fragile brain. His "soft spot" is not closing like it should and his doctors are worried about continued brain damage and hearing loss.  His doctors are suggesting 2 years of cranial band treatment but his insurance is not approving the recommendation. Because his main doctors are 8-10 hours away, Megan is unable to work and is not sure how she can realistically pay for a minimum of two sets of bands as well the added monthly travel between Wink and Fort Worth.

We want to help by offering financial support for Hudson's two years of cranial bands. No parent should have to choose between necessary interventions for their medically fragile child and basic living expenses. With your generosity we will be able to cover 2 sets of bands and 2 years of travel, offering huge financial peace of mind to a loving and dedicated single mother. Please help us by making a tax-deductible donation in support of Hudson Strong.