Thank you everybody. Our campaign is now over. ✕
Ride to Give - A Bike for Bennie
✖
Gallery (2) 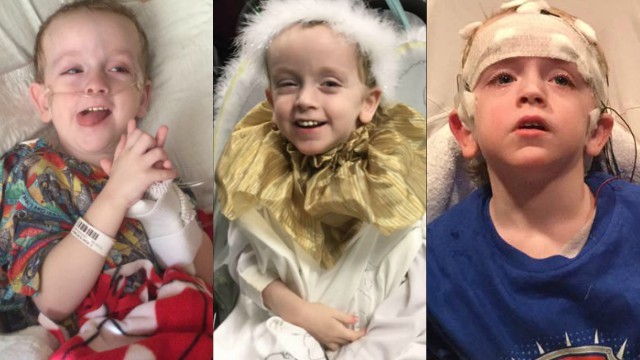 Even before birth, 4 yr old Bennie Pomo of Madison, WI was a fighter.

At just 6 weeks pregnant, his mother Mary started bleeding and passing blood clots and later developed a life-threatening intestinal infection and pre-eclampsia. She spent the majority of her pregnancy in the hospital and ended up giving birth to Bennie 3 weeks early. Because he was born not breathing, Bennie was placed immediately in the NICU and put on a ventilator to help stabilize his underdeveloped lungs.

Bennie spent 48 hours on a ventilator and 17 days in the NICU on oxygen and a feeding tube. When they finally brought Bennie home, however, he continued to throw up after every feeding and lost weight. Thankfully he held his own until reoccurring pneumonia landed him back in the hospital.

Because of his fragile health, Bennie had multiple stays in the ICU with no real answers as he got sicker and sicker. 10 days after his 1st birthday, Bennie had his first surgery, a 6-hour major stomach surgery which included a Nissen procedure and g-tube placement to battle his terrible reflux. As Bennie was recovering and after 11 months of misdiagnosis, the Pomo’s finally received a formal diagnosis, Chromosome 14Q deletion 13.1-21.2. Chromosome 14 is the area on our DNA that controls brain function, heart, lungs, digestion, kidneys, thyroid, spinal cord and overall development, which explained many of Bennie's complex symptoms.

All the uncertainty about Bennie's health took a toll on his mother Mary, who suffered a devastating depression and, as a result, gained weight from emotional eating. As part of her health improvement plan, Mary and her older children began riding their bicycles in the neighborhood.  She saw an immediate improvement, both emotionally and physically, and dreams of including Bennie in these daily bike rides. The Duet Wheelchair Bicycle Tandem by Frank Mobility would make that possible. Unfortunately, the cost of the Duet is financially out of reach.

Ride to Give is eager to step in. Please help us purchase Bennie and his family a Duet Wheelchair Bicycle Tandem so he can enjoy a life of inclusion rather than one of exclusion.

You can keep up with Bennie's progress by following him on Facebook.