Thank you everybody. Our campaign is now over. ✕
Ride to Give - An Adaptive Bike for Rosalee
✖
Gallery (1) 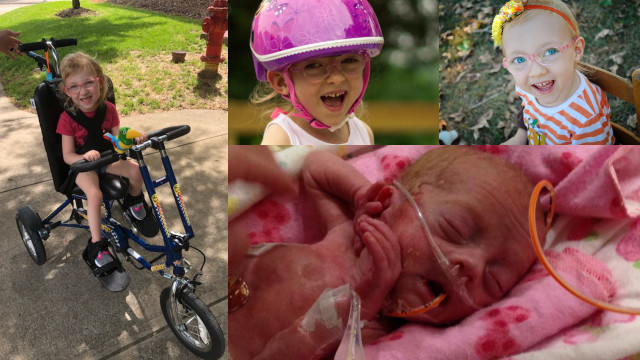 4 and 1/2 years ago, Jessica and Aaron Truelove were excitedly awaiting the birth of their first child.  Jessica's pregnancy had seemed typical, but Rosalee was born at 28 weeks weighing 1lb 15oz. The night she was born, Rosalee had a pulmonary hemorrhage causing her fight for life to become even more difficult.  For a tiny baby like Rosalee, the chances of her surviving prematurity AND the pulmonary hemorrhage were slim.

Rosalee ended up spending 73 days in the NICU.

At her discharge cranial ultrasound on day 69, Jessica and Aaron were told that Rosalee had suffered from a brain injury called Periventricular Leukomalacia. Her doctors were not sure when this injury occurred, but it was sometime between birth and day 69. Periventricular Leukomalacia (PVL) is characterized by the death of the white matter of the brain due to  lack of oxygen or blood flow to the periventricular area of the brain. Babies with PVL are at risk for motor disorders, delayed mental development, coordination problems, and vision and hearing impairments. PVL may be accompanied by a hemorrhage or bleeding in the periventricular-intraventricular area (the area around and inside the ventricles) and can lead to cerebral palsy. The disorder is diagnosed by ultrasound of the head, as was what the case with Rosalee.

Since knowing about her injury early on, Rosalee's doctors were able to prescribe interventions which were key to giving Rosalee the best possible outcome. As soon as Rosalee was discharged from the NICU, she began in-home therapy sessions while she grew stronger and less at risk for common germs. During these early months, the hardest part with Rosalee's initial diagnosis of PVL was the waiting game. The Trueloves became consumed with what Rosalee was or wasn't doing on time, basically putting her under a developmental microscope. When Rosalee was around 6-8 months, it became apparent that she was becoming increasingly delayed in her fine and gross motor skills, but it was not until she was 18 months that the Trueloves received the official diagnosis of Spastic Diplegia Cerebral Palsy.

Jessica and Aaron continue to work with Rosalee daily to help improve her mobility and build her strength. Rosalee receives multiple therapies weekly, and as far as her prognosis, her neurologist and developmental specialist feel like she will eventually be able to walk with assistance for a short distance, but will spend her life primarily in a wheelchair. In September, Rosalee will become a big sister and the Trueloves are working extra hard this summer to keep her on track.

One of the things that Rosalee's therapists suggested to help strengthen her core and build independence is an adaptive bicycle, like the ones sold by www.freedomconcepts.com. Cycling would offer her greater independence, a creative way to increase her mobility, and most importantly a way to connect with her parents through outdoor exercise. The staff at Freedom Concepts have visited with Rosalee and found the perfect size bike for her use now and to grow with her for years to come. Unfortunately, the Trueloves' insurance will not cover the cost so Freedom Concepts suggested they reach out to Ride to Give.

Ride to Give is excited to offer the Truloves support in purchasing an adaptive bicycle for Rosalee.  We have seen time and again how alternative therapies, like cycling, can make a significant impact on medically complex children like Rosalee. Please help us purchase Rosalee a Freedom Concepts Bicycle so she can enjoy a life of inclusion rather than one of exclusion.