Please visit our new campaign, Ride to Give - Make a Reoccurring Donation ✕
Ride to Give - Love and Support for Leah
✖
Gallery (1) 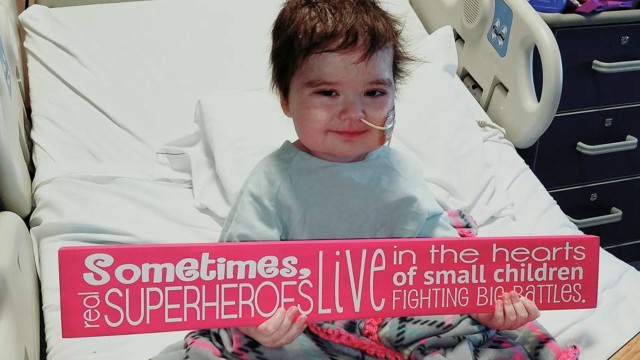 Lindsay Carroll of Tracy, CA is a newly single mother of Elijah, 8, Natasha, 5, and her youngest, Leah, who just turned 4. Leah's first months of life were full of multiple colds/coughs, breathing treatments, antibiotics, and x-rays. In July of 2013, at six months old, Leah began spiking fevers that worried her mother. Lindsay took Leah to the doctor, and after a thorough examination, it was determined that Leah “just had a virus,” and Lindsay could make her more comfortable with rest and Tylenol to bring down the fever. Lindsay took her baby home and followed the pediatrician’s orders.

Two days later, Leah's health had worsened, and Lindsay rushed her baby to the ER. The ER staff tried to get an IV started but had no success. Instead, they had to drill into her bone to get fluids into her. The situation turned critical, and tiny Leah was airlifted to Oakland Children's Hospital. After Leah had been stabilized, Lindsay was informed that her daughter had septic shock and was also battling a blood infection. After a lengthy stay in the hospital Leah beat the infection and was released, but more tests were needed to discover the cause of her compromised immune system.

Six months post-septic shock, following many medical tests and a genetic panel, Leah was diagnosed with Severe Congenital Neutropenia. Lindsay and her former husband were stunned and scared.

Severe Congenital Neutropenia is one of several genetic disorders of the bone marrow that is evident at birth and characterized by a lack of neutrophils, a specific type of white blood cells that are important in fighting infections. Children with SCN suffer from frequent bacterial infections, and for Leah, her condition prevents her from producing white blood cells that are used to fight them. Without this first line of defense, Leah contracted the blood infection that caused her to become septic.

Doctors suggested a bone marrow transplant, but only once she was older. Unfortunately after nine hospitalizations in 6 months due to fever and illness, Leah’s care team started looking for a donor. This sweet little girl has subsequently had two bone marrow transplants. Each has been problematic. Currently, Leah has spent the last 300 plus days in the hospital post-transplant fighting Chronic Graft vs. Host disease. In short, the newly transplanted blood cells are fighting with her already fragile system and making her very sick.

Thankfully, all of Leah’s primary medical care is covered by insurance while she is hospitalized or living in the sterile environment of the hospital-run apartment just across the street from where she is being treated. Unfortunately, Leah and Lindsay are over an hour away from home. Lindsay spends four nights a week with Leah and then returns home to see her two older children and work as a waitress at a restaurant. Her employer has been sympathetic and very flexible, but working only three days a week does not nearly cover all of Lindsay’s bills. The stress of missing her older children as well as not being able to fully afford to pay rent to her parents each month has taken an emotional toll on Lindsay. She wants to do what’s best for her children, however after so much isolation and time in the hospital she feels like she is drowning emotionally and financially.

Army here’s where we need your help. After reading Leah's story, we were moved by the sincere love friends and family have shown Lindsay and her daughter, but know she needs more financial assistance to weather the next 4 or 5 months Leah is hospitalized. The goal is to get Leah home to her siblings within that time. The funds donated will be used to cover rent, food, other living and travel expenses. Our fundraiser will give Lindsay peace of mind knowing she can provide for her children while she focuses on getting Leah well. Please help us support Leah and Lindsay by making a tax-deductible donation to Ride to Give.

Contributions are solicited with the understanding that the donee organization (Ride to Give, 501c3 tax ID 46-2952297) has complete discretion and control over the use of all donated funds.  Questions about how your donation is used can be answered by clicking here.  Please visit Ride to Give on the web at www.ridetogive.com or on Facebook at www.facebook.com/ridetogive.