Please visit our new campaign, Ride to Give - Make a Reoccurring Donation ✕
Ride to Give - Supporting Pray for Anna
✖
Gallery (1) 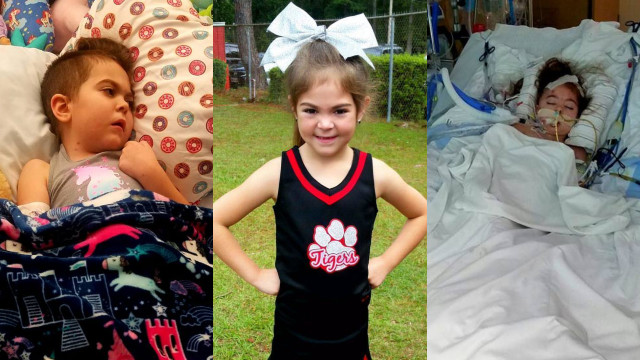 7-year-old Annaston Cox of Altha, FL was born with a Congenital Heart Defect called Mitral Valve Prolapse with Insufficiency as well as Graves Disease. At the age of 3, she had her first open heart surgery to repair a valve, at Shands Children’s Hospital in Gainesville, FL. Just before she was taken back for surgery, Anna was given a shot of Ativan for separation anxiety, but within seconds she went limp and quit breathing. Anna had gone into anaphylactic shock and needed to be intubated. Thankfully Anna’s surgeons were able to stabilize her and proceed with repairing the valve. After surgery, Anna started gaining weight and truly living life to the fullest. She was just like any other child… she played t-ball, cheered for the county league football team, and competed with the Kitty Katz cheer competition squad up until March 2018 when everything changed.

Last Winter, Anna started having severe headaches, high fevers, unexplained exhaustion, night sweats, and she refused to eat. She began to wake during the night screaming about head pain and became unable to walk or climb in or out of bed. Her parents, Ron and Tanya Cox, grew increasingly concerned and took Anna to her pediatrician several times. Blood was drawn twice a week for a month, along with frequent X-rays and CT scans but Anna’s doctors were stumped, saying it was either a blood disorder or autoimmune disease. Anna continued to suffer.

At her wit's end, Tanya demanded answers, refusing to leave the pediatrician’s office until she got them. That same day, April 4, 2018, Anna was admitted to Tallahassee Memorial Hospital where after even more testing they still had no definitive answers except that Anna might have an autoimmune disease, Meningitis or a bone marrow disorder.

On April 7th, 2018, Anna was transferred by ambulance to the Cardiac ICU at Shand’s Children’s Hospital in Gainesville. A few hours after they arrived, the Cox were told that Anna had Infective Endocarditis; strep bacteria had entered her bloodstream and settled on her Mitral Valve. Anna was started on aggressive antibiotics, and numerous additional tests were run. When Anna’s eyes were checked, the doctor noticed that her optic nerves were swollen and her pupils didn’t react to light as they should, so an emergency MRI was ordered.

While lying in the hospital bed comforting her daughter, a team of doctors came in and told Tanya that the MRI had shown several small blood clots on both sides of Anna’s brain and that she had already had a few “silent” strokes. The pressure from the blood clots explained why Anna’s optic nerves were swollen as well as her severe head pain. Then Tanya was told the devastating news that they had found an aneurysm on the back of her brain and in at that moment Tanya realized how truly sick Anna was and was heartbroken.

Anna needed her infected valve replaced with a mechanical one, but the heart surgeon chose to wait because there was a strong chance of a major stroke if her aneurysm burst. Anna’s neurosurgeon was concerned because the bacteria was settled on the valve which was still producing blot clots. They knew any one of those clots could be fatal. The Cox were told without the heart valve replacement Anna would have a heart attack, but there was still a strong chance she could suffer a deadly stroke. Ronald and Tanya struggled with this decision for two weeks until a blot clot moved into Anna's lung and the decision was taken out of their hands.

On May 1, 2018, Anna had open heart surgery, and her damaged heart valve was replaced with a mechanical valve. Thankfully the surgery went well, and the doctors were able to remove all the bacteria. In the days to follow, Anna was recovering so well that her doctors began discussing a discharge date to the step-down unit, but that all changed on May 5th, 2018 when Anna woke up around 3 am screaming for help. Tanya ran to the bedside and found Anna sitting straight up with her eyes fixed to the right and her arms and legs drawn up and rigid. Tanya's sweet daughter couldn't see and the head pain was unbearable.

Tanya knew in her heart that Anna was having a stroke and just as the hospital staff rushed into the room, Anna went limp and quit breathing.
After being stabilized, Anna had an emergency craniotomy to evacuate the hemorrhage that had caused the stroke. Because she had just had major heart surgery three days earlier, the neurosurgeon gave Anna 2% chance to live through the procedure. The Cox's were told that Anna would most likely never awaken following surgery because of the extensive damage to her brain. They said she would probably be in a coma and on a ventilator and have little to no quality of life.

On June 11th, 2018, Anna was transferred to Brooks Rehabilitation for in-patient therapy but was discharged on June 26th because she made little progress during her two weeks stay. So with no preparation and still waiting for Anna’s insurance to update, the Cox's brought their daughter home. The past two months have been emotionally, physically, and financially draining for Tanya, Ronald, and their three other children. They have had to travel roughly three hours each way from their home in Altha to Anna’s specialist, all with two-year-old Branson in toe. Ronald is the manager at Roadmart in Marianna, FL and while management has been very understanding, his frequent absences from work have had a negative impact on the family finances.

Anna is almost three months post-surgery and still is unable to say any words, follow commands, or communicate. The neurosurgeon told the Cox family that sadly Anna’s overall long-term prognosis is poor, but Tanya and Ronald refuse to give up on their daughter. There are so many things that are needed for Anna that insurance has yet to approve or may not cover. The Cox's want to provide the best possible future for Anna, but without the necessary equipment, it has been challenging. What Anna really needs most is a wheelchair, a stander, and a special needs activity seat so she can do therapy at home as well as become more mobile. Also, at this time their insurance is not covering her tube feeding, so they have to cover the $800 a month cost of her supplies out of pocket as well.

When Ride to Give read Anna story we knew we had to support Tanya and Ronald as they do their best to provide as bright a future as that can for their daughter. The funds we raise will help fill in the financial gaps while they await insurance decisions regarding Anna's equipment needs, her tube feeding supplies, and help cover the costs for now twice-weekly trip Gainesville to see Anna’s medical team. Please help Ride to Give as we support this sweet family by making a tax-deductible donation.