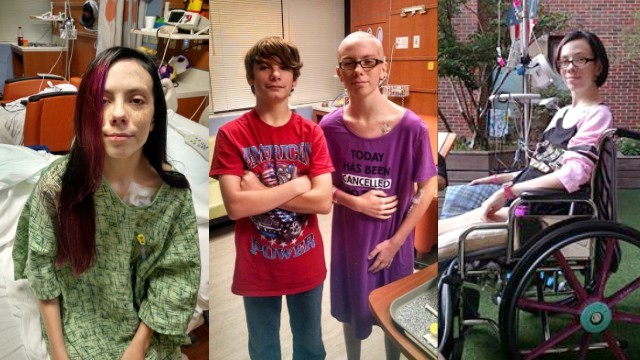 On Sunday, September 25th, 10 members of Team Ride to Give will participate in Ironman Chattanooga on behalf of 14-year-old Cheyanna Edmondson who is currently battling Ewing's sarcoma.  Bellow is her story...

14 years ago, Sherry and Spud Edmondson of Charleston, TN were blessed when Sherry gave birth to twins Joshua and Cheyanna, join two older brothers from Sherry’s previous marriage. They are a very humble and gracious family, who love spending time together, being outdoors, and rooting for the University of Alabama. Over the years, the Edmondsons have faced many challenges like any family, but none like the one they are facing now, fighting back against childhood cancer.

In the spring of 2016, Cheyanna took a hard fall. She was walking on some rocks by a creek when her foot slipped, and she took a tumble that left her banged up and bruised. At the time of her accident she was checked out by the pediatrician and all looked fine. Three months later, Cheyanna was still having pain in her lower back and hip and frequent headaches. She returned to the pediatrician who treated her for a pulled muscle. Unfortunately, Cheyanna continued to be in constant pain, so she went back to the pediatrician several times, but received no real answers. When her parents notice knots had formed on Cheyanna's head, Sherry took her back to the doctor and insisted on an MRI of her pelvic area and her skull. Her mother’s intuition was screaming there was something more going on with Cheyanna, and she was insistent on further testing.

As soon as her doctor saw the MRI they sent the Edmondsons directly to the pediatric oncology department of Children's Hospital at Erlanger in Chattanooga, the longest 45-minute drive of their lives. After more testing that included a biopsy on August 29th, it was discovered that Cheyanna was suffering from an extremely rare bone cancer called Ewing’s Sarcoma. Her parents we completely heartbroken by the shocking news their daughter had cancer.

Ewing’s is a primary bone cancer that affects mainly children and adolescents. There are approximately 200 new cases of Ewing's sarcoma diagnosed in the United States annually which account for only 1% of all childhood cancers. Ewing tumors that grow in bone like Cheyanna’s are typically found in the long bones of the legs and arms, or bones in the chest, trunk, pelvis, back, or head. A tumor that has spread can cause a child to feel very tired and to lose weight. If it has spread to the lungs, it can also cause breathlessness. Tumors near the spine can cause unexplained weakness or even paralysis. Because many illnesses can cause the same symptoms as Ewing's sarcoma, it's sometimes missed in its early stages. Looking back now, Sherry can see signs where Cheyanna was tired frequently long before she fell as well as other small changes, but she had no idea that the sleepiness and chronic pain her daughter had been experiencing was cancer.

Because of the aggressive treatment needed for Ewing’s, Cheyanna has had to remain in the hospital. Cheyanna has only been home twice since the end of August and just for a few days each time, but it was enough to lift her spirits. She is currently at the beginning of a 12-week cycle of chemotherapy which will keep her in Chattanooga most of the next three months. Following this cycle, Cheyanna will have another MRI and after reading the results, her doctors will decide whether to do radiation or take another path. That is all the Edmondsons know for now, but they continue to lean on their strong faith and pray that Cheyanna will continue to bravely battle her cancer and win.

Unfortunately, being in the hospital for the last month has taken a financial toll on Cheyanne’s family. Spud works for Liquid Metal and Coating as a truck driver and spray tech, which involves weekly travel across the country, but after Cheyanna’s diagnosis, he was able to get his schedule modified. The company is allowing him to work in their local location so he can be close to his family, but by doing so his hours were cut to a strict 40 per week, and he lost the overtime that had been a huge financial help for his family. Sherry is currently out of work so she can stay with Cheyanna in Chattanooga while she is inpatient.

When we began looking for a local Chattanooga cause family to feature during Ironman Chattanooga, we contacted the Lana's Love Foundation, a 501c3 charity that offers support to families with children who have cancer. Holly, the director of Lana’s Love, reached out to the Child Life Team at Children's Hospital, and the first child they both thought of was Cheyanna because of her amazing attitude that leaves a lasting impression on all who cross her path. Right after Cheyanna first arrived at the hospital in August, she put a telling sign on her room door… “Happy thoughts, No Tears.” At just 14 Cheyanna should be enjoying 7th grade and playing softball but instead, she is facing her Ewing’s sarcoma head on with incredible courage, a positive attitude, and her strong faith in God.

Team Ride to Give is proud to be participating in Ironman Chattanooga on behalf of Cheyanna to help raise funds for medical expenses that are not covered by insurance. Her current insurance will pay for much of her cancer treatment, but when all is said and done, there will be a large bill that is the responsibility of her parents. Please help us support Cheyanna's medical expenses by making a tax-deductible donation to Ride to Give.