Thank you everybody. Our campaign is now over. ✕
Ride to Give - Amtrak for Olly
SubscribeUnsubscribe
✖
Gallery (1) 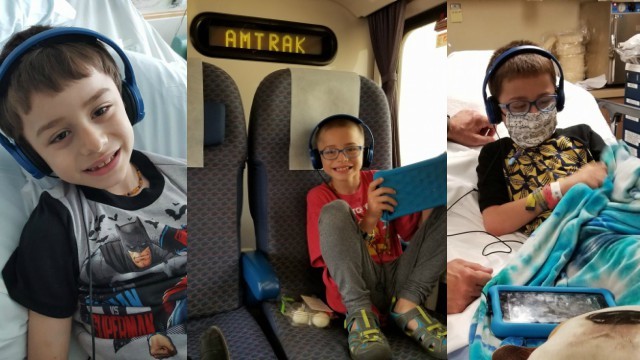 David and Shannan Ajluni of Visalia, Ca always knew something was "wrong" with their third son Olly. He is a surviving twin and was born premature. After his birth, Olly spent a month in the NICU and for much of his first year he went back and forth to the hospital with breathing issues, heart issues, gut issues, low muscle tone, hearing concerns, and frequent illnesses. None of the doctors Olly saw seemed to communicate with each other, and each specialist seemed content to blame his prematurity for the ailments that plagued him.

At age 17 months, Olly developed a lump on his shoulder. It took two and a half months for him to be seen by an orthopedist. Once he was seen, things moved fast and David and Shannan were very concerned. Within two weeks, Olly was diagnosed, had surgery, and began chemotherapy for a rare, incurable cancer/autoimmune hybrid called Langerhan Cell Histiocytosis.

Langerhans Cell Histiocytosis (LCH) occurs when the body accumulates too many immature Langerhans cells, a type of white blood cell that normally helps the body fight infection. In LCH, too many Langerhans cells are produced and build up in certain parts of the body where they can form tumors or damage organs. The cause of this disease is unknown. LCH occurs in 1:200,000 children and may appear as a single lesion or can affect many body systems. Olly had evidence of LCH in his skin, ears, lymph nodes, bone marrow, digestive system, liver, and evidence of it affecting his pituitary gland. He also had extensive bone lesions, including both shoulder blades, collarbone, ribs, and skull.

At 19 months (12/30/2011), Olly received aggressive chemotherapy, and in December of 2012, his scans stopped lighting up with cancer. He was technically in remission, but his chemo continued until May of 2013. The Ajlunis continued to deal with the effects chemo had on Olly including seizures, until he was finally stable in August of 2014.

Then in November of 2014, Olly's mother Shannan was diagnosed with Stage 3 Invasive Infiltrating Ductal Carcinoma Breast Cancer. She began chemotherapy before she had a bilateral mastectomy that included removal of all her lymph nodes on the left and 15 on the right. Surgery was followed by extensive radiation and in December of 2015 she had a hysterectomy. Shannan was finally considered in stable remission in January of 2016.

There were a few months in 2016 where the Ajlunis thought that cancer was behind them. They exhaled and started to rebuild their lives post-cancer. Sadly their reprieve was not to last.

In the Spring of 2016, Olly started running high fevers with no cause, stumbling and had a sudden drastic personality shift. He went from super sweet and always happy to angry and raging. He physically hurt himself and lashed out at others. His parents knew something was wrong because of these sudden changes, but it took persistance to convince doctors to do Olly's scans ahead of schedule. This time there was not a massive lump. His cancer had diffused and was very difficult to see on the scans.

The return of his Langerhans Cell Histiocytosis was confirmed by scans in May, and he restarted chemo in June. The cancer had returned in his bone marrow, spleen, skin, and hypothalamus of his brain.

Every 28 days, Olly and his mother travel from Visalia to San Diego for an overnight admission to Rady Children's Hospital of San Diego for chemo and antibiotic therapy. Seven days later, he is admitted to their local hospital for IVIG therapy. This regimen will continue forever, or until Olly is of the age to make decisions for himself and transfer to an adult oncologist. His LCH is now in his central nervous system, and the chemo is keeping him as stable as possible and warding off the neurodegeneration that comes along with CNS involvement as long as possible.

Olly is fighting again with NO. END. IN. SIGHT.

Because of his cancer's progression, there will not be another remission for Olly.

All this travel has been a substantial financial burden for the Ajlunis. Olly's father David currently holds two jobs to support his family. He works as a substitute special ed instructional aide for Visalia Unified School District and as a stockman at Hobby Lobby. Shannan had to medically retire from her career as an educational interpreter for the deaf as she is now disabled from the lymph involvement of her breast cancer. The Ajlunis have two cars that in are in no shape to repeatedly make the monthly 700-mile round trip. Taking the train is an adventure and saves further wear and tear on their cars. When in San Diego they prefer to stay at the Ronald McDonald House, but when a room is not available they are forced to spend four nights at a local hotel. Each trip can cost upwards of $500 with travel, hotel, and food. David and Shannan live within a very strict household budget but are still finding it hard to support their family of five and take Olly's chemo trips.

Ride to Give wants to help by raising funds for a year's worth of Olly's trips to Rady Children's Hospital of San Diego. Our fundraiser offers Olly's parents the financial peace of mind knowing they will not have to sacrifice paying their bills to take Olly to chemotherapy.  Please help us by making a tax-deductible donation to Ride to Give.

You may also Shannan's journey by liking her Facebook page Shan vs. Breast Cancer.