Thank you everybody. Our campaign is now over. ✕
Ride to Give - Supporting Lily
SubscribeUnsubscribe
✖
Gallery (1) 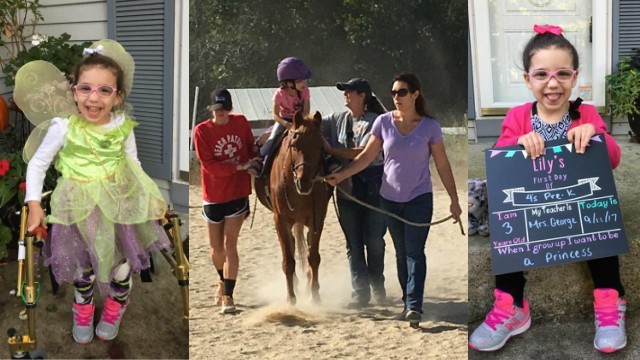 Four years ago, Jeffrey and Anna Matarese of Burtonsville, MD welcomed a daughter, Lily, at 34 weeks gestation. Lily was a surviving twin, and her twin passed away in utero around 30 weeks. The Matareses we instantly in love with their baby girl and after spending 11 days in the NICU for difficulty maintaining her body temperature, they were excited to take her home to begin life as a family of three. Anna and Jeffery enjoyed all the pleasures of being first time parents, savoring every moment with their new baby. It wasn't until Lily was around six months old that they started noticing that Lily was not meeting her developmental milestones, such as sitting up. Since she was premature, they had expected some delays and waited a little for her to catch up before becoming alarmed. At around nine months she was still not making progress so after some testing Lily began Early Intervention Services.


At 12 months, Lily was still struggling to make progress, and the progress that was being made was slow. Lily was then seen by a Developmental Pediatrician who diagnosed her with Spastic Diplegia Cerebral Palsy.


Spastic Diplegia Cerebral Palsy is a neurological condition that usually appears in infancy or early childhood, and permanently affects muscle control and coordination. As with other types of cerebral palsy, Spastic Diplegia is usually caused by brain damage, which generally happens before, during, or shortly after birth. Babies born prematurely and with low birth weight are at a higher risk over all of developing cerebral palsy. Affected people have increased muscle tone which leads to spasticity (stiff or tight muscles and exaggerated reflexes) in the legs. The arm muscles are generally less affected or not affected at all. This means that Lily's muscles are tight, primarily affects her legs. Other signs and symptoms may include delayed motor or movement milestones (i.e. rolling over, sitting, standing); walking on toes; and a "scissored" gait (style of walking). At this time, Lily still cannot sit, stand or walk independently. Lily uses a walker for short distances but still needs assistance. She uses a manual wheelchair for longer distances. The big goal is that Lily will one day be able to walk independently, at least short distances.


Currently Lily in pre-kindergarten and receives physical therapy and occupational therapy twice weekly at school and insurance covered private physical therapy once a week at home. Lily also receives hippotherapy once a week which is not covered by insurance. Therapeutic riding, also known as hippotherapy, can benefit individuals with almost any cognitive, physical and/or emotional disability. Because horseback riding gently and rhythmically moves the rider’s body in a manner similar to a human gait, riders with physical disabilities often show improvement in flexibility, balance, and muscle strength. For individuals with a mental or emotional disability, the unique relationship formed with the horse can lead to increased confidence, patience, and self-esteem.
As Lily gets older and bigger, she is in need of additional equipment that is not covered by her health insurance. The Matareses would like to get Lily the FireflySplashy Portable Bath Seat for safer bathing and Contoured Wrap-Around Padded Lo-Back Toilet Support to keep her safe while on the toilet. Jeffery and Anna both work full-time and are not eligible for state or county benefits. It is becoming increasingly challenging to meet Lily’s needs financially now that their insurance is denying claims for equipment.


This is where Ride to Give steps in, to help Jeffery and Anna provide the safety equipment Lilly deserves as well as one year of weekly hippotherapy via Unbridled Rehabilitation Services, LLC at the Therapeutic & Recreational Riding Center, Inc. Please help us by making a tax-deductible donation to Ride to Give.

Contributions are solicited with the understanding that the donee organization (Ride to Give, 501c3 tax ID 46-2952297)   has complete discretion and control over the use of all donated funds.   Questions about how your donation is used can be answered by clicking here.  Please visit Ride to Give on the web at www.ridetogive.com or on Facebook at www.facebook.com/ridetogive.