Please visit our new campaign, Ride to Give - Make a Reoccurring Donation ✕
Ride to Give & Team Boom - Isaiah is our Ironman
✖
Gallery (1) 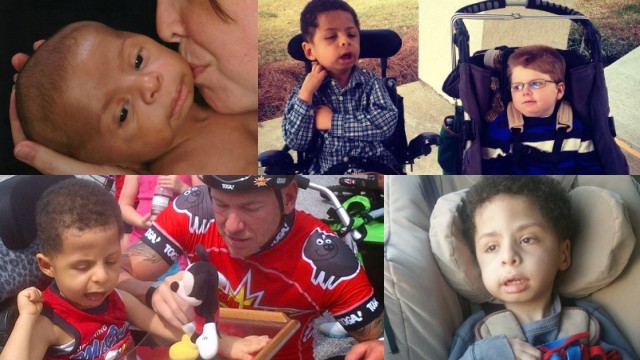 Dana and April Tate of Athens, GA were beyond excited to meet their first child, a son, to be born in the summer of 2010. After a rather uneventful pregnancy, Isaiah was born via c-section, and the Tates fell instantly in love.  Shortly after his birth, however, April noticed he was not sucking like she had expected, so the following morning the hospital pediatrician had him admitted to the NICU to run some tests. Not surprisingly doctors found out that Isaiah was tongue tied, but the Tates were shocked to learn he had no ear lobes, a concave chest, and no lower jaw. They were in disbelief, but looked to their faith to get them through those tough first few weeks and months.

The hospital did extensive genetic testing and by his first birthday, the Tates received the devastating news that Isaiah had an extremely rare chromosomal disorder called Inverted duplication and deletion 8p.

A 2013 Orpha.net article states that less than 50 cases of inverted duplication and deletion 8p have been reported worldwide, and there is little known about this complex disorder. 8p inverted duplication/deletion syndrome is characterized clinically by mild to severe intellectual deficit, severe developmental delay (psychomotor and speech development), hypotonia with a the tendency to develop progressive hypertonia and severe orthopedic problems over time, minor facial anomalies and agenesis of the corpus callosum.  Isaiah has since been diagnosed with Cerebral Palsy, Ulcerative colitis and the congenital facial abnormality Pierre Robin Sequence. Isaiah also suffers from febrile seizures and his parents feel he may be having absent seizures as well.

It has not been an easy road for Isaiah. He has had 4 sets of ear tubes, inguinal hernia repair, orchiopexy on his right side, lower jaw advancement (jaw distraction), fecal transplant, G-tube placement, tendon release in groin and thigh both sides, frequent colonoscopies and endoscopies, and had dental surgery to remove 5 teeth. He has also had dangerous sleep apnea where his breathing would go as low as 60% during the night. Soon he will need a full inpatient EEG to test his seizure activity, new ear tubes, his adenoid removal, and an orchiopexy on his left side.

Isaiah is non-verbal, can not walk and when not at school, he spends most of his time on the floor playing with his 2-year-old brother Isaac or in his wheelchair. To help him have the best life possible, Isaiah receives physical, occupational, feeding and speech therapy both at school and at home. He is monitored closely by a team of doctors and specialist, but through it all, Isaiah has kept a warm smile on his face. His laughter is infectious and his courage immeasurable. His mother April says, "Isaiah is the happiest kid I know, even with everything he has been through he is smiling 90% of the time. He is smart even though he is not verbal, and he is a hard worker. He also knows how to play you to get out of something he does not want to do."

Right now what Isaiah needs most is special needs equipment not covered by his insurance. He has outgrown most of the items he had been using, many of which were meant for typical babies and toddlers. Now that he is stronger, he is ready for more stable and specially padded equipment made for an almost 6-year-old boy. Sadly, anything that is built to higher standards with more support for special needs children has a very large price tag.

This is where Ride to Give and Team Boom want to help the Tate family.  We want to purchase the things Isaiah needs but are financially out of reach for his parents. The list includes... a Sleep Safe Bed, a Convaid Trekker light weight stroller, a Special Tomato Hi-Low Seating System, a full support special needs swing, a Vitamix to help prepare his puréed tube-fed diet, and removable wheelchair ramps. They are also in need of some repairs to their van so it stays safe to take Isaiah to and from his many weekly appointments. All of the above items may seem like luxuries but truly are necessities and will be life changing for Isaiah.

Please make your donation in support of Team Ride to Give  and Team Boom as we travel to Chattanooga to race 70.3 miles for Isaiah, our Ironman!

You can keep up with Isaiah's progress by following his Facebook page "A Day in the Life of Isaiah."