Thank you everybody. Our campaign is now over. ✕
Ride to Give - Supporting Cezar's Cancer Journey
✖
Gallery (1) 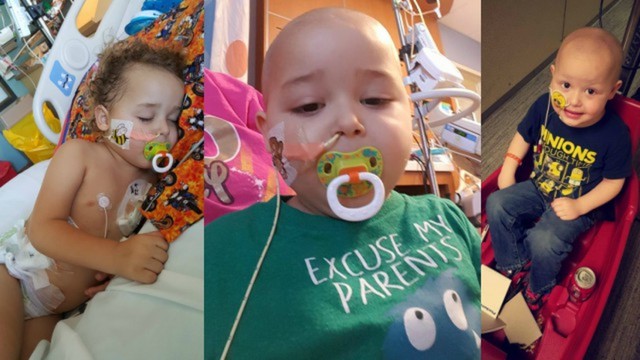 On Sunday, May 21st, 2017, six members of Team Ride to Give participated

in Ironman 70.3 Chattanooga on behalf 3-year-old Cezar Maldonado. They were:

And on Saturday, May 21st, Leigh Roberts Duquette participated

in the Dina LaVigna Breath of Life Ventura Triathlon.

On July 12th, 2013, David and Rebecca Maldonado of Dayton, TN, along with big brother Izaiah, welcomed baby Cezar into their family.  Life for the Maldonados was wonderfully full and felt perfect until May of 2016 when for no apparent reason Cezar began limping.  His first hospital stay was on May 19th, 2016 where he had three x-rays, an MRI, and fluid removed from his hip, knee, and ankle. Cezar was subsequently sent home, and his parents were given no definitive answers as to why their sweet toddler was limping. They returned to his primary care physician a few weeks later when they were told Cezar’s blood work came back abnormal and that his liver and spleen were enlarged.

Cezar was directly admitted to the hematology/oncology unit at Children’s Hospital at Erlanger in Chattanooga where his parents were told their 3-year-old had pre-b cell Acute Lymphoblastic Leukemia (ALL) which has a survival rate of 95%. In a child with ALL, too many stem cells become lymphoblasts, B lymphocytes, or T lymphocytes. These cells are cancer (leukemia) cells. The leukemia cells do not work like normal lymphocytes and are not able to fight infection very well. Also, as the number of leukemia cells increases in the blood and bone marrow, there is less room for healthy white blood cells, red blood cells, and platelets. This may lead to infection, anemia, and easy bleeding. Cezar received blood and platelets and had a port placed so he could begin chemotherapy treatments. During the port placement surgery on June 9th, Cezar had heart rate complications causing this relatively simple operation to take longer than expected. Cezar came out of surgery with a chest tube and had to recover in the Pediatric Intensive Care Unit for two days.

Following this surgery, he was diagnosed with Wolff-Parkinson-White Syndrome. In Wolff-Parkinson-White (WPW) syndrome, an extra electrical pathway between the heart's upper and lower chambers causes a rapid heartbeat. This additional pathway is present at birth and relatively rare. How often a rapid heart rate occurs varies depending on the person. Some individuals with WPW syndrome have only a few episodes of rapid heart rate. Others may have the rapid heart rate once or twice a week or more. Also, there may be no symptoms at all, so like Cezar, WPW is found only when a heart test is done for another reason.

After his first chest tube was removed, Cezar had complications which led to another surgery to remove fluid that had built up around his heart and lung. This meant more chest tubes and another PICU stay. This second hospital stay lasted nine days, and Cezar received chemo, a lumbar puncture, blood and platelets three times, three abdominal x-rays, 14 chest x-rays, a lymph node scan, an EKG, and echo and a bone marrow aspirate. Cezar’s parents were shocked when the results from the bone marrow aspirate changed his diagnosis from Pre-B cell ALL to Philadelphia+ Pre-B cell ALL, a form of leukemia that only has a 30% survival rate. Their hearts sank with fear for their young son but were told that if he uses the medication Gleevec every day it could increase his survival rate to 70%. Cezar now takes Gleevec every day, through a feeding tube that was placed because he could not take this strong medication by mouth without throwing up.

One of the complications Cezar has suffered from his time spent confined to a hospital bed is the loss of range of motion in his ankles. His muscle mass decreased so much so that he could not even stand, let alone walk. Cezar started physical therapy and for many months had to use braces and a walker to get around. With continued physical therapy, Cezar has increased his range of motion and his overall strength.

Cezar has been in treatment for less than a year and still has a long road ahead of him battling ALL. He typically spends around two weeks per month in the hospital, which has taken an enormous financial toll on his family’s finances. His father, David, is a custodian at the Tennessee Valley Authority in Chattanooga while his mother, Rebecca, attends to Cezar’s health issues. It has been a rough year, and they are behind on bills and have many out of pocket medical expenses.

This is where Ride to Give has offered to step in and offer the Maldonado family our support.  On Sunday, May 21st, six members of Team Ride to Give will participate in Ironman 70.3 Chattanooga on behalf of Cezar. They will proudly battle the half-Ironman race course while Cezar bravely battles cancer.

Contributions are solicited with the understanding that the donee organization (Ride to Give, 501c3 tax ID 46-2952297) has complete discretion and control over the use of all donated funds.  Questions about how your donation is used can be answered by clicking here.   Please visit Ride to Give on the web at www.ridetogive.com or on Facebook at www.facebook.com/ridetogive.