Please visit our new campaign, Ride to Give - Make a Reoccurring Donation ✕
Ride to Give - Supporting Peyton's Wish
✖
Gallery (1) 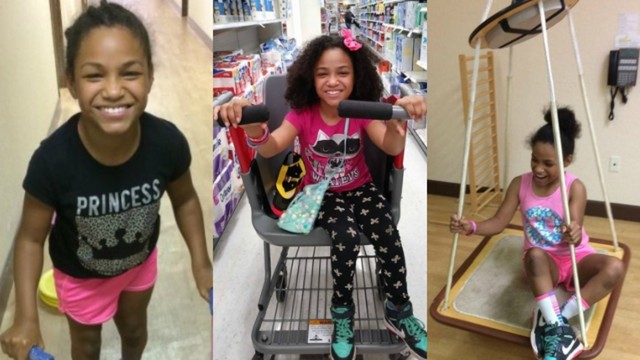 11-year-old Peyton Manigo of Joliet, IL was born at 28 weeks,  and weighed only 3 pounds 5 ounces. She was placed on a ventilator for her first two days of life and used O2 for a week and feeding tube for four weeks. Peyton ended up spending a total of 6 weeks in the NICU before she was finally healthy enough to go home. When Peyton was 9 months old, she failed her first developmental screening. She was not able to sit on her own, crawl or even stand with assistance. She started Occupational Therapy at 10 months old and within a month began Physical Therapy as well.

At 15 months old, her Physical Therapist mentioned that she was seeing many signs of cerebral palsy and recommended Peyton's family see a specialist, and after extensive testing, Peyton was officially diagnosed at 18 months old with Spastic Diplegic Cerebral Palsy.

Spastic diplegia affects the legs and arms, making them stiff and contracted (spastic). The legs are generally affected more than the arms. This makes crawling and walking difficult, and most often, children will walk with a wide “scissor gate.” Legs can also turn inward and cross at the knees due to excessive muscle contractions. Other children may not be able to walk at all. Some children with spastic diplegia will also have some form of cognitive impairment, which can range in severity.

Sadly, there is no cure, and treatment options vary depending on the signs and symptoms present in each person and the severity of the condition. Doctors told Peyton's parents that she would never walk, be wheelchair bound, and said she would probably be cognitively delayed as well. The Manigos were not giving up on Peyton and worked with her therapists to get all the equipment she would need to thrive.

After years of therapy, braces, botox, medicine, and countless doctor appointment, Peyton had invasive surgery called Selective Dorsal Rhizotomy (SDR). This procedure involves sectioning (cutting) of some of the sensory nerve fibers that come from the muscles and enter the spinal cord, identifying and connecting the ones that work and disconnecting the ones that do not work. After surgery, Peyton endured months of 4-5 days a week therapy and 4 months post-SDR she underwent Tendon Lengthening Following SDR (PERCS) to relieve contractures (limited motion) in her joints.

At 10 years old, Peyton attended the intensive therapy program at Walk This Way USA in Texas. Their skilled therapists taught Peyton to use tripod canes, and while there, she took her first ever independent steps! In 2016, Peyton had what her mother hopes to be her last surgery, which was foot/ankle placement where doctors place a wedge in her foot to keep it in the right spot as well as a second heel cord release. This time she was in casts for six weeks plus non-weight bearing. Once Peyton's casts came off, it was hard to get her moving again and very slow to get back where she was.

In the summer of 2017, Heather found Conductive Education of Orlando (CECO), special needs summer camp. CECO's summer programs were intentionally developed to increase physical and social independence in a safe environment for individuals with cerebral palsy and other related motor disabilities. Their fun and intensive summer sessions include physical, educational, and self-care skills, led by PETO-trained instructors and supported by trained program assistants. During her four weeks at CECO, Peyton's self-confidence was bolstered and her desire to work hard to improve her mobility grew. Peyton returned home willing to use her canes rather than fighting to use them. She is more willing to work harder and longer to achieve her goal of independence.

The changes in Peyton's mobility the past six months have been extraordinary. Since camp at CECO, Peyton has been using her canes more and more, and her regular PT is on board with working on her walking mobility. Peyton's doctor has increased her PT to 2x a week to solely focus on forearm crutches. Peyton will also be going to an intensive therapy session in St. Louis in January with the Rhizotomy team and will only be working with her crutches.

Heather would love for Peyton to return to Conductive Education of Orlando for another 4-week session in Summer 2018. Unfortunately, insurance will not cover camp, and the cost is financially out of reach for the Manigos. Both school employees, the Manigos are living paycheck to paycheck and just making ends meet. They only want the very best for their vibrant and hardworking daughter, so she reached out to Ride to Give for help.

This is where Ride to Give steps in, to help Heather provide Peyton with therapeutic summer camp at Conductive Education of Orlando in the summer of 2018. Please help us make Peyton's Wish of summer camp come true by making a tax-deductible donation to Ride to Give.