Thank you everybody. Our campaign is now over. ✕
Ride to Give - Comforting Brianna
✖
Gallery (1) 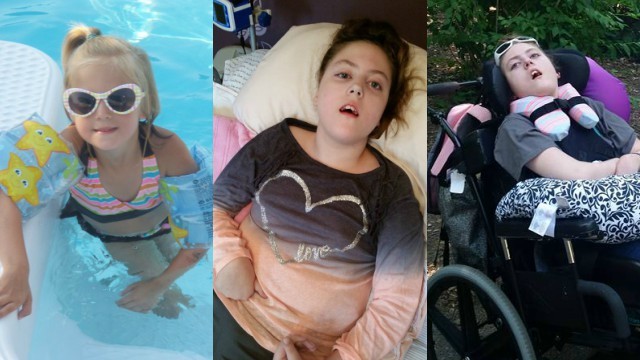 In March of 2002, Tammy Skriver gave birth to her second child, a baby girl she named Brianna, who thrived and grew into a curious little toddler. She was always running, climbing, and jumping off of almost anything. She was fearless, loving to ride bikes with her friends and go down the slides at the playground. Besides a slight speech impediment, Brianna seemed to be developing into a typical young girl. However, as time went by, Tammy started noticing Brianna wasn't skipping and couldn't jump on one foot.

Around her fifth birthday, Tammy moved from Florida to North Carolina where she began to look for answers for Brianna's mobility, speech, and other undiagnosed issues. Brianna's kindergarten teacher and pediatrician came to an agreement that she had ADHD, so on doctor's advice, Tammy started her on medication. It was a complete disaster. Brianna couldn’t sit or concentrate, and talked so much she had severe dry mouth. Tammy called the doctor in fear that the dose was too much, but he told her to continue giving Brianna the medicine, and things would get better, but they never did. After six months of waiting, Tammy stopped the ADHD medication and demanded Brianna be seen by a neurologist.

Sadly, Brianna slowly slid into a vegetative state: drooling, wetting herself and having seizures. She was extremely lethargic, stopped walking, and eventually was unable to even crawl. It was devastating, but Tammy finally obtained a referral to Duke Medical. Unfortunately, Duke was unable to make a definitive diagnosis, so they referred Brianna to the National Institute of Health's Undiagnosed Disease Program.

In 2012 after exhaustive testing and nearly seven years of regression, the National Institute of Health called Tammy with the crushing news that Brianna had been officially diagnosed with a fatal genetic disorder called Batten Disease CLN6. While the frustration of not having a diagnosis was gone, the heartbreak continues for Brianna's family as there are no known treatments and no cure for Batten Disease.

In the four years since her diagnosis, Brianna has become almost entirely immobile, can not speak, and is 100% dependent on others. Recently, Tammy was able to get their insurance to cover a lift and some bathroom modifications, but there is still much Brianna needs to improve her overall quality of life. It has been a rough road financially for Tammy. Brianna's father in not involved in her life and has done little to offer financial or emotional support.

Tammy, Brianna, and her brother Austin have lost nearly everything to this awful disease so they moved to upstate NY to be closer to Tammy's family. The home where they live needs an electrical update to efficiently run Brianna's equipment. There are attachments to her suction machine that need replacing, and her mother would love to have a comfortable recliner so Brianna could spend more time out of bed.

Brianna needs 24/7 care, so Tammy has become Brianna's primary caregiver and can not work outside the home. Her bill payments have fallen gotten behind, they have overdue car repairs, and the propane tank (needed for hot water) is almost empty. Tammy is beyond stressed, and her own health has suffered. She feels helpless in her ability to keep her family financially afloat and give Brianna the best care possible.

After reading Brianna's story, Ride to Give  knew we had to assist this strong and loving family. Please help us bring comfort to Brianna and peace of mind to her mother by making your tax deductible donation to Ride to Give.

Contributions are solicited with the understanding that the donee organization (Ride to Give, 501c3 tax ID 46-2952297) has complete discretion and control over the use of all donated funds. Questions about how your donation is used can be answered by clicking here.   Please visit Ride to Give on the web at www.ridetogive.com or on Facebook at www.facebook.com/ridetogive.