Thank you everybody. Our campaign is now over. ✕
Ride to Give - Love for Mighty Ivy!
✖
Gallery (1) 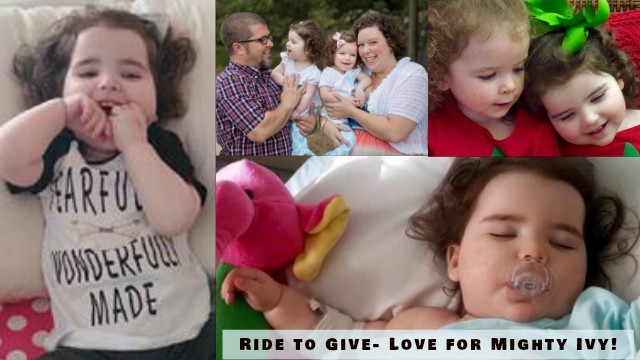 Ivy and her twin sister Isabel were born happy and healthy to Shelly and John Raley from Perry, GA. From the beginning, Isabel was your typical baby while Ivy struggled to eat and gain weight. When she finally did eat, she wasn't growing. Shelly knew within the first two months of Ivy’s life that something was very wrong and went to doctor after doctor searching for answers. Three different pediatricians diagnosed her with reflux, failure to thrive, and colic. By eight months old, Ivy was not accomplishing milestones. She could not roll or sit alone like her sister. Ivy was tested for cerebral palsy and cystic fibrosis, but given a clean bill of health by her neurologist. With the help of physical and occupational therapy, Ivy could sit alone by her first birthday, but showed regression and delays in other common areas of development. She stopped using her hands to grip toys and began gripping her shirt collar or keeping her hands in her mouth. Ivy’s symptoms presented very much like an autistic child: she preferred to be alone, she rocked, flapped her arms, and cried up to 15-20 hours a day, nonstop. She could not eat food and still took only a bottle. Her parents were becoming increasingly concerned and again went searching for answers.

Finally, they found a Pediatric Nurse Practitioner that specializes in mitochondrial and genetic diseases. In November 2014, she ordered a battery of tests including a genetic panel, metabolic panel, mitochondrial panel, brain MRI, and EEG. She made referrals to cardiology, neurology, orthopedics, genetics, and other specialists. In January 2015, the genetic blood tests showed a MecP2 mutation that indicated Rett Syndrome. Geneticists at the Mayo Clinic and Emory University Medical Center examined Ivy's records and said she had 100% of symptoms of Rett's which was officially verified by a simple blood test.

Since then, Ivy has had a g tube placed, a Fundoplication, a Broviac, ear tubes, and about 4 PICC lines. She had septic shock on Thanksgiving 2015 which nearly took her life. She has seizures, worsening scoliosis, and chronic pain. She sees a Rett specialist in Birmingham twice a year. Ivy is far from stable and each day varies. She has chronic issues with pneumonia and has suffered a partial lung collapse. Also, because of Ivy’s continuing gastrointestinal issues, her parents hope to take her to Houston, TX later this year to see a GI specialist.

Sadly, because of Rett Syndrome and its many side effects, Ivy is trapped in a body that she cannot control. Due to the degenerative nature of this disease, Ivy has lost the full use of her hands, she has lost the few words she could say, and she cannot walk or crawl. Surprisingly to those who don’t know about Rett Syndrome, Ivy does understand everything around her. Mentally Ivy is just like her twin sister and with the help of her speech therapy, she recently began using a Tobii eye gaze machine to better communicate.

At this time, Ivy mainly gets palliative care to keep her symptoms under control and pain fee as possible. Her parents try to prevent her disease from rapidly progressing and avoid common complications such as pneumonia and osteoporosis and scoliosis. Currently, all Ivy’s care is to keep her comfortable because overall Ivy’s life expectancy is unknown. But her parents work with her constantly and know with time plus the right equipment, they can help Ivy have a better life.

Before her twins were born, Shelly worked as a nurse, so she knows how important the proper care and therapy is for children like Ivy.  Right now there are things Ivy needs that insurance will not cover, most importantly a specialized adjustable bed, like the ones found at HighLine Sleep, as she spends the majority of her time laying down. She also needs a larger car seat, a stander, a mobile sitter, and comfortable casual seating. These items and many others may seem like luxuries to Ivy’s insurance company, but to the Raleys they are critical for her ongoing development and growth.

Please help Ride to Give provide Ivy with the tools she needs to keep her body strong and allow her the best life possible.