Thank you everybody. Our campaign is now over. ✕
Ride to Give - Flash Fundraiser for Derrick
SubscribeUnsubscribe
✖
Gallery (1) 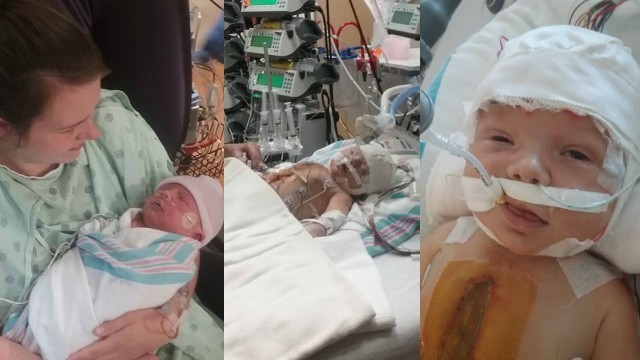 Deanna Toner, 22 and Joseph Brandt, 32 of Saginaw, Michigan felt blessed to be adding a new baby to their young family.  Deanna’s pregnancy seemed to be progressing normally when they went in for their routine 20-week ultrasound. Like many parents, they were excited to find out whether they were expecting a boy or girl but during the test, that also evaluates the baby's anatomy and checks for any abnormalities, the ultrasound technologist grew silent.  After the exam, she told Deanna and Joseph she could not see the left portion of their son’s heart and referred them to a specialist for a closer look.  After many follow-up tests, they found out their unborn son Derrick had a rare heart condition called Hypoplastic Left Heart Syndrome.

They were shocked and heartbroken.

Hypoplastic Left Heart Syndrome or HLHS is a serious problem that involves several parts of the left side of the heart. They were told that the left side of his heart stopped developing very early on in the womb, and as a result, the right side had grown larger to compensate. They were referred to The University of Michigan C.S. Mott Children’s Hospital to get the specialized care Derrick would need. The doctors at U of M are top in their field and told Deanna and Joseph their son would need three open-heart surgeries before he turns 2 to correct this issue.

On September 4th, 2016 Deanna was induced, and at 7:35 am gave birth to Derrick Andrew Brandt. He was 8lbs 7oz. and 20 1/2 inches. Derrick was placed on Deanna’s chest immediately after birth but was struggling to breathe, and very purple, although he was crying. After only a few minutes, doctors took him to the NICU where they gave him oxygen, placed an IV in his umbilical cord and began to give him prostaglandins to keep his heart working so he could survive until surgery. The next day, Derrick was transferred to the PCTU (pediatric cardiology thoracic unit) because he kept "forgetting to breathe" and his heart rate had dropped below the acceptable range of 100bpm. Thankfully, Derrick seemed to correct himself on both issues with only minimal intervention. Over the next few days, he continued to improve, and he was cleared for his first open heart surgery.

On Friday, September 9th, before he was even a week old, Derrick underwent the first of his three expected surgeries, a Norwood operation, which is the most complex and highest risk procedure in the sequence of staged reconstruction for HLHS. It was a 4-6 hour procedure, and Derrick did very well!  He is a true fighter, and his U of M team of specialists are very pleased with his prognosis moving forward.  He will remain in the hospital for roughly four more weeks and then return to Ann Arbor for frequent follow-up appointments, a 200 mile round trip.

Even though they tried to plan in advance, the extended time in the hospital is putting a huge financial strain on Derrick’s parents, who are both on the kitchen staff at the Saginaw Country Club. Deanna is on maternity leave for a few more weeks, but after almost two weeks off, Joseph has had to return to work.  Club management has been very supportive, guaranteeing Deanna a job when she can come back. But Deanna is uncertain when that will be and understandably leery of sending Derrick to daycare. Their families have been super helpful, taking care of two-year-old old Joseph and four-year-old Brookelynn, but other arrangements will soon need to be made .

The overall stress of being 100 miles away from home, unable to work and praying for her new baby is overwhelming for Deanna.

After reading Derrick's amazing story, Ride to Give has offered our support. We know a Flash Fundraiser could help ease Deanna and Joseph’s burden and allow them to be more present for Derrick while he heals. Please help us give the gift of peace of mind by making a tax-deductible donation to Ride to Give.