Thank you everybody. Our campaign is now over. ✕
Ride to Give - Support for Riley
SubscribeUnsubscribe
✖
Gallery (1) 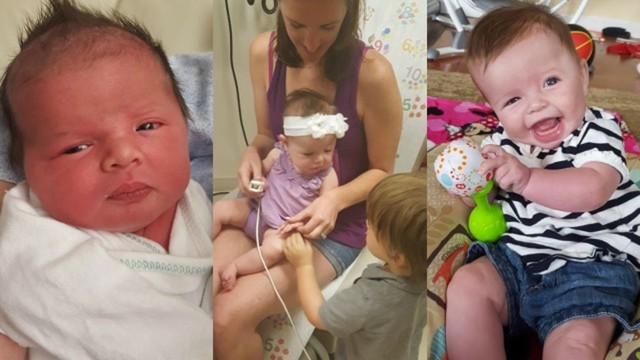 On February 20th, 2016, Mike and Christine Reynolds of Tappan, NY welcomed the most precious little 8 pound 2oz baby girl into their family of three, joining 2-year-old brother Michael. From the moment she was born, the Reynolds noticed her left forehead was indented and her eye slightly closed. While still in the hospital they brought this to the attention of multiple doctors and nurses who repeatedly told them the indentation would fix itself.  Mike and Christine were relieved that their new-born baby was otherwise healthy and could not wait to get home to introduce Riley to her older brother.

At Riley’s first well-baby visit three days after she was born, the Reynolds again expressed concern about Riley's head. But once again they were told not to worry as it would fix itself. So they pushed their worries aside and enjoyed every moment of being a family of four. Sadly, however, everything changed on April 21st at Riley’s 2-month well-baby checkup when her doctor noted the indent had not improved.

After a thorough examination, Riley’s pediatrician gave Christine the heartbreaking news her sweet baby girl had Craniosynostosis, and the only cure was surgery.

Craniosynostosis (kray-nee-o-sin-os-TOE-sis) is a birth defect in which one or more of the joints between the bones of a baby's skull close prematurely, before the baby's brain is fully formed. A baby's skull has seven bones. Normally, these bones don't fuse until around age 2, giving a baby's brain time to grow. Joints called cranial sutures, made of strong, fibrous tissue, hold these bones together. In the front of a baby's skull, the sutures intersect in the large soft spot (fontanel) on the top of a baby's head. Typically, the sutures remain flexible until the bones fuse. When a baby has craniosynostosis, his or her brain can't grow in its natural shape, and their head becomes misshapen.

Christine said at that moment time just stood still, and she broke down. How could her precious 2-month-old baby need surgery and what could she do to help her child?

After consulting with three well-respected neurosurgeons in New York City and hearing all the available surgical options, Riley is scheduled for a Cranio Vault Reconstruction on September 7th at NYU Medical Center. During this surgery, a zig-zag patterned cut is made from ear-to-ear (which allows for the scar to be more easily covered with hair in the future). The skull bone is then cut to release the fused suture. After the suture is released, the skull is then stabilized with dissolvable plates and screws. Subsequent proceedures are sometimes needed, so Riley will be followed for many years ahead to ensure there is no increased pressure on her brain and that her skull is growing normally.

Riley also does not have a brow bone, which will be reconstructed during this surgery. The only downfall with this option is there is a 50% chance Riley may need a blood transfusion. Luckily her mother is a blood match and can donate at the hospital if needed.  After the surgery Riley head will swell, causing her eyes to shut, which will take a few days to subside. She will spend the first day or two in the NICU under close supervision and another 1 to 3 days on the general pediatric floor. With this option, the results are immediate with a very low percentage of having to have additional surgeries.

In addition to her craniosynostosis, Riley has had a hard time gaining weight and was subsequently found to have a milk allergy. Riley is seen by her pediatrician every other week to track her weight and has been on three different formulas and four different medications. After seeing a G.I. specialist, Riley was put on a special hypoallergenic formula to help her gain weight, so her body is strong for her skull surgery. However, the formula that only comes in small, 12 oz powder containers that cost around $25 each. The cost of her formula is adding up quickly as Riley's eating 24-30 oz a day, but it is working, and she has slowly begun to gain weight!

The Reynolds are both fiercely independent, hardworking parents who take pride in getting by on their own. Mike is a proud officer in the NYPD and Christine currently works verifying insurance at a local medical office.  Unfortunately, Christine’s job is being phased out shortly, and finding new employment may be delayed as she stays by Riley's side as she recovers. Their insurance recently denied their recent claim for Riley's formula, and there is a $1500 deductible for Riley’s surgery and any cost over $200,000 will be Mike and Christine’s responsibility. The trips to NYC to see specialists and the surgeon are costly with tolls, parking, and meals. There will also be lost days of work for Mike during Riley's surgery, and no guarantee how long her recovery will take.

This mounting financial burden has only added to the Reynolds stress over their daughter's impending surgery but thankfully, family and friends have come together to support Mike and Christine.  When Ride to Give heard Riley's story we knew had to help them reach their goal before September 7th. Please help Ride to Give offer peace of mind and much need financial support to Riley and her family during this challenging time.

Contributions are solicited with the understanding that the donee organization (Ride to Give, 501c3 tax ID 46-2952297) has complete discretion and control over the use of all donated funds. Questions about how your donation is used can be answered by clicking here.    Please visit Ride to Give on the web at www.ridetogive.com or on Facebook at www.facebook.com/ridetogive.