Thank you everybody. Our campaign is now over. ✕
Ride to Give - A Service Dog for Joshua
SubscribeUnsubscribe
✖
Gallery (1) 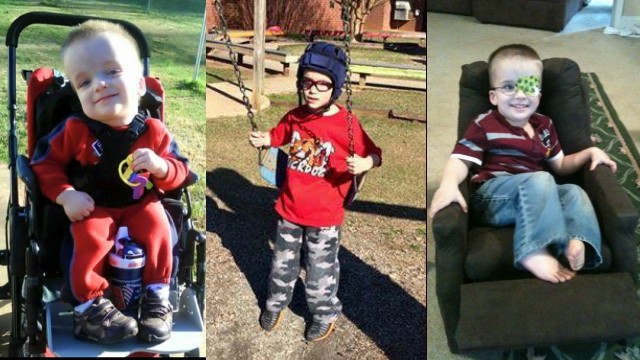 Eight years ago, Christy Flowers of Pendergrass, GA was  excited to be pregnant with her 6th child. But as the pregnancy progressed, she started to feel like something wasn't quite right. At her 20-week ultrasound, Christy was nervous, and when the ultrasound technician noticed her baby's brain did not look as it should, a specialist was called, and she became fearful for her unborn child.

It took three long days before Christy received news no pregnant mother expects to hear… your baby has a congenital brain malformation, Dandy-Walker Syndrome, and his prognosis is unclear. Christy's pregnancy with Joshua was scary and uncertain, and although doctors suggested she terminate the pregnancy, she refused and could not wait to welcome another son into the family.

Dandy-Walker Syndrome is a malformation in the cerebellum, the area in the back of the brain that helps coordinate movement, as well as the fluid-filled spaces around it. For Joshua, the right back part of his brain never fully developed and is now completely dead. There is a cyst formation the size of a lemon on his brain, and sadly it cannot be removed. In the majority of individuals with Dandy-Walkers, signs and symptoms usually present at birth or develop within the first year of life. These include a large sized head, poor muscle tone, problems with movement, coordination, intellect, mood, and other neurological functions.

Some children with Dandy Walkers will have a dangerous buildup of fluid in the brain called hydrocephalus. Joshua has hydrocephalus and has undergone three shunt surgeries to manage the fluid and limit any additional damage. Because of his injured brain, Joshua performs on the level of a three or four-year-old, but attends school, plays t-ball, and enjoys watching truck videos, especially ones with red trucks. He is a light to be around and has weathered life’s challenges with grace and humor.

Joshua suffers from an unrelated congenital abnormality called Cortical Dysplasia, a malformation that occurs when the top layer of the brain does not form properly causing the complicated system of neurons to develop abnormally. Cortical Dysplasia and these miss-firing neurons are one of the most common causes of epilepsy in children. Joshua has suffered hard to control seizures his whole life. He has had every type of seizure, from small, short focal seizures to 45-minute long grand mal seizures. Currently, Joshua's seizures occur mostly at night. Out of the Flower's fear of Sudden Death by Epilepsy, Joshua still sleeps with his mother carefully watching guard. But at almost nine years old, Joshua's therapists and special needs teachers feel it has come time for him to sleep in his own space.

Two years ago, Joshua’s doctors suggested that an alert dog trained to detect seizure activity could offer Joshua greater freedom and increased seizure control, but after reaching out to 4 Paws for Ability, Christy realized the cost was way outside their budget. But five months ago, after a few scary seizures, she filed the paperwork knowing this was no longer a luxury but had become a necessity.

The Flowers have already raised a third of the funds needed to finalize their application with 4 Paws for Ability and need to complete their fundraising for Joshua to be officially placed on the schedule for his service dog training class. This is where we step in... Help us bring peace of mind to the Flowers family by donating below.

You can keep up with Joshua's progress by following his Facebook page "Our Journey With Joshua."