Thank you everybody. Our campaign is now over. ✕
Ride to Give - Flash Fundraiser for #NoahStrong
SubscribeUnsubscribe
✖
Gallery (1) 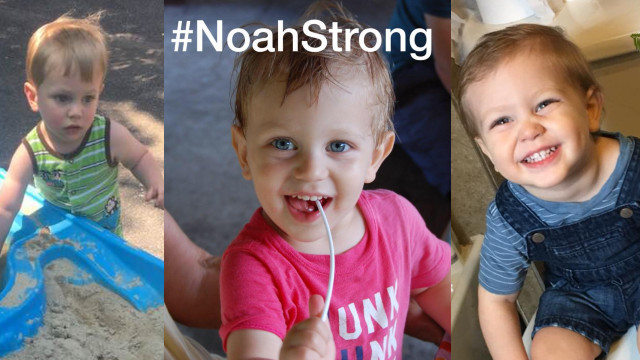 On July 24th, 2018- Elizabeth Desorbo received a call from Connecticut Children’s Medical Center no mother ever wants to receive… her two-year-old son, Noah Alexander, had been in a horrific car accident and had been transported to the hospital in Hartford in very critical condition. The vehicle in which her fiancé, Joshua Gootkin, Noah, and a friend were traveling was switching lanes on I-91 South in Rocky Hill, CT when it collided with another vehicle resulting in a devastating rollover. All three were ejected from the car upon impact.

Unfortunately, the driver, a friend of Elizabeth and Joshua, succumbed to his injuries and passed away shortly upon arriving at the hospital.

While still strapped into his car seat, Noah landed on the shoulder of the highway where Joshua found him clinging to life. Thankfully, Jasmin Flores, a nurse who was also traveling I-91, ran to Noah’s aide while they awaited the first responders.  Noah was unconscious when Ms. Flores reached him and she immediately began CPR on his lifeless body.  “I checked, there was no pulse, no heart rate, his eyes were just white and no response,” Ms. Flores said in a local news report. “My hand was on his chest and literally felt his heart when it started. I've done CPR many times and never been so happy to feel a heartbeat as when I felt his heart jump start.”

After being stabilized at the scene, Noah was transported to Connecticut Children's Medical Center where he was admitted in critical condition into the PICU. Noah was immediately intubated and his injuries assessed. When Elizabeth finally arrived at the hospital, the PICU staff explained the injuries Noah had sustained… a broken femur, fractured skull and a concussion with significant bleeding in the brain. Her beautiful son had suffered a traumatic brain injury, and doctors promised they were going to their best to save his life. Noah was immediately put into a Spica cast which casts his whole broken leg, goes up around his hips and halfway down his thigh of the unbroken leg. Thankfully his doctors were able to align his bone from outside and did to have to operate.

Noah is now awake but still not talking or moving on his own and has been placed on a feeding tube. Because of the traumatic brain injury, doctors don’t know how much he is going to have to relearn. He will stay in the hospital for the forseeable future and is already receiving inpatient physical, occupational and speech therapy. Sadly with TBI’s, there is no real timeline as to healing so Elizabeth and Joshua have no idea how far or how quickly Noah will progress.

Elizabeth has only briefly left Noah’s side since July 24th, and with no discharge date in sight, she has taken a leave of absence from her job working at a doggie daycare, grooming, and boarding facility to stay at the hospital. Following the accident, Joshua was transported to Hartford Hospital where he was later released with non-life threatening but significant injuries that will keep him out of work as a self-employed landscaper for the forseeable future.

Elizabeth is trying to keep positive but is worried about their immediate and future financial needs while Noah continues to be hospitalized and Joshua heals.

Ride to Give was sent Noah’s story and as soon as we read it we knew we needed to support this sweet boy and his parents. The funds we raise will help Elizabeth financially provide for her family so she can stay full time by Noah’s side. Doctors are still unsure of the full extent of Noah’s brain injuries but are hopeful with continued therapy and lots of support he will have the best possible recovery. Please join Ride to Give as we offer financial peace of mind to Elizabeth and Joshua as Noah continues to be hospitalized during his long recovery.