Please visit our new campaign, Ride to Give - Make a Reoccurring Donation ✕
Ride to Give - Supporting Megan's Dream
✖
Gallery (1) 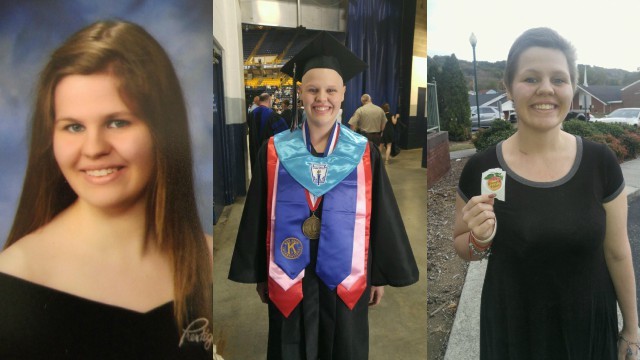 In late January of 2016, Wendy Wolfe of Hixson, TN noticed that her 18-year-old daughter Megan was more tired than usual and would frequently wake up at night saying she was having cold chills. They were at the pediatrician’s office every other week, but her doctor thought Megan either had a virus or thyroid issue and not to worry. Oddly, Megan continued to get worse until March when she began having trouble breathing, Wendy took her to the ER and after 10 hours of tests, x-rays and CT scan Megan moved her to oncology and they we told she had cancer. A biopsy and bone marrow extraction were done, and it was determined that Megan had Hodgkin’s Lymphoma Stage III B, as well as 12-17 blood clots and three bulky mass tumors.

Megan and her family were stunned.

Hodgkin disease (Hodgkin lymphoma) is a type of lymphoma cancer that starts in white blood cells called lymphocytes. Lymphocytes are part of the immune system. Because lymphoid tissue is in many areas of the body, Hodgkin disease can start almost anywhere. Most often it starts in lymph nodes in the upper part of the body. The most common sites are in the chest, in the neck, or under the arms. Hodgkin disease most often spreads through the lymph vessels in a stepwise fashion from lymph node to lymph node. Rarely, and late in the disease, it can invade the bloodstream and spread to other parts of the body, including the liver, lungs, and/or bone marrow. Megan has Stage III Hodgkin lymphoma which means her cancer is in the lymph nodes on both sides of the diaphragm which, if not treated aggressively, can also extend to an area or organ adjacent to the lymph node or to the spleen. The letter “B” in Megan’s diagnosis means she had symptoms such as unexplained weight loss, drenching night sweats, or fever.

Immediately Megan began blood thinners to get rid of the clots and started chemotherapy, but just two days after being admitted to the hospital, Megan suffered severe Supraventricular tachycardia (SVT). During an episode of SVT, the heart's electrical system doesn't work right, causing the heart to beat very fast. Your heart beats at from 60 to 100 beats a minute but during SVT may reach 300 beats a minute. Megan’s heart had to be stopped twice in order for it to be regulated. To permanently help correct this issue, on Wednesday, December 7th, Megan is undergoing a cardiac ablation which will destroy a tiny part of the heart that causes the problem.

Megan is an amazing young woman who never complains and has never asked, "Why me?" She cried for 10 minutes when she was told her diagnosis then asked “what’s next” and “when can I go back to school.” Her mother says Megan is the strongest person she knows and the most positive. Megan smiles no matter what, worrying more about the other kids in oncology than her own disease. She also never asks for anything for herself. For her last birthday, Megan organized a blood drive asking for blood instead of gifts... she wanted to have plenty of blood banked for the kids in oncology. She always puts others first, loves big and strives to make others happy!

Megan is a true fighter. She has had 64 chemo treatments and 14 radiation treatments and thankfully is currently in remission. Throughout her treatment, Megan managed to keep up her studies and graduated from high school 8th in her class.  She has been accepted into the nursing at the University of Tennessee, Chattanooga. Now 19, Megan is determined to be a pediatric oncology nurse so she can help other kids who are facing what she has. She will begin by taking a few online classes while she heals from her ablation then transfer to full-time classes on campus.  But after a year that involved many days off from work and out of pocket expenses, finances are tight. Her mother, Wendy, would love to be able to see Megan begin college with all she needs to succeed and Ride to Give agrees!

This holiday season, Ride to Give is excited to support Megan’s dream of becoming a nurse by providing her with a laptop as well as funds for school supplies such as a scientific calculator, stethoscope, her first nursing uniforms, and books. We think Megan’s dedication, positive attitude, and empathy for others will make her an amazing nurse. Please help us support Megan by making a tax-deductible donation to Ride to Give.

For updates on Megan, please follow Ride to Give on Facebook as Mehan does not have a prayer/support page.