Thank you everybody. Our campaign is now over. ✕
Ride to Give- Flash Ironman Fundraiser for Stephen
✖
Gallery (1) 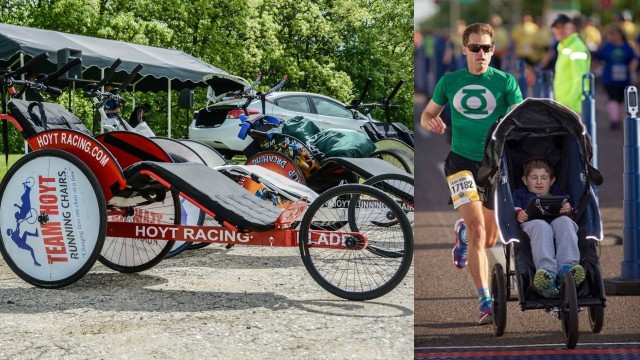 On Sunday, September 24th Team Ride to Give and Team Boom

will be participating in Ironman 70.3 Augusta  in Augusta, GA

Erik and Patty Heine of Oklahoma City, OK were excited to welcome their first child, a son Stephen, in 2007. After he was born, the Heines observed Stephen had broad thumbs and toes, which they found odd but endearing. He also had a LOT of hair! From birth, Stephen struggled with feeding which caused him to have trouble gaining weight. It was frustrating, but they chalked it up to reflux and enjoy their sweet new baby.

As he grew, Stephen hit his milestones on time, but always at the late end of the "normal" range. When Stephen was nine months old, he had hernia surgery, which led to the discovery of a heart murmur and a kidney abnormality. Following surgery, Stephen's physical development stalled, and at one year old, he was referred for Early Intervention for therapies. There were still lingering questions about his health issues, and after additional testing, Stephen was diagnosed with Rubinstein Taybi Syndrome in May of 2008.

Rubinstein Taybi Syndrome, a genetic disorder which affects approximately 1:250,000 births, is characterized by short stature, moderate to severe intellectual disability, distinctive facial features, and broad thumbs and first toes. Additional features of the disorder can include eye abnormalities, heart and kidney defects, dental problems, and obesity. These signs and symptoms vary among affected individuals. People with this condition have an increased risk of developing noncancerous and cancerous tumors, including certain kinds of brain tumors. Cancer of blood-forming tissue (leukemia) also occurs more frequently in people with Rubinstein Taybi syndrome. Infants born with this severe form of the disorder usually survive only into early childhood.

Thankfully Stephen’s overall health has balanced out, and he is a happy and thriving 4th grader.

Currently, Stephen receives private physical and occupational therapies, as well as physical, occupational, and speech therapy in his school setting.  To meet his goals of independence as an adult, Stephen spends approximately 3/4 of his school day with his typically developing peers, in the regular education classroom. Also, he has difficulty communicating verbally, so he uses Proloquo2Go software on an iPad mini to communicate.

Doctors have not given the Heines a timeline as to what they should expect with Stephen, so they take everything one day at a time. They're determined to not let their child's disability or illness keep them from doing the things they love and find a way to adapt and make that activity possible. Erik is an avid runner, and for years it has been an activity he can share with Stephen. Up until recently, they have been able to use a traditional running stroller which Stephen has now out grown and is not 100% safe for him. After much research, Eric found the Blade at www.hoytrunningchairs.com.

Hoyt Running Chairs designs and manufactures state-of-the-art racing chairs for individuals with disabilities. As a subdivision of Southbridge Tool & Manufacturing, they are able to custom build each chair to the comfort and needs of both the rider and the runner. They pride themselves on getting to know their clients and providing them with the ultimate racing experience.

Mike Didonato, the president of Southbridge Tool & Manufacturing first heard the story of Rick and Dick Hoyt in 2009. Dick Hoyt has pushed his son Rick, who was diagnosed a spastic quadriplegic with cerebral palsy after his birth in 1962, in over 1,000 races including marathons, triathlons, and 6 Ironman races. Their story inspired Mike, and a few months later he happened to meet Dick Hoyt at a local grocery store. Mike mentioned his family’s manufacturing company and offered to fix Rick’s chair if needed. The next year, Dick Hoyt showed up at Southbridge Tool and Manufacturing and asked if a brand new chair could be built for Rick because he was very uncomfortable in his original chair.

The Signature was built in time for the Hoyts to compete in the 2010 Boston Marathon. The chair was beautifully built for comfort, speed, and maneuverability. Soon, other teams and families began asking for a chair. In 2014, Mike was approached by Nick Sotar, a retired bicycle shop owner, who admired The Signature but had some ideas to improve the design. Nick presented Mike with a design for a revolutionary new racing chair called The Blade, which is easily disassembled and can be shipped in a bike box.

After Stephen was diagnosed with Rubinstein Taybi syndrome at 18 months old, it took almost seven years before they were able to get him on non-income-based Medicaid. As a result, the Heines ate through their entire family savings paying for medical bills and therapies even with insurance. Unfortunately, the cost of a Blade racing wheelchair is approximately 10% of Erik’s gross annual salary as a Professor of Music at Oklahoma City University, and not something they have sitting around or in a savings account. The Blade has not been deemed "essential" by their insurance. However, Stephen's Occupational and Physical Therapists both believe that a chair that he can use for over a decade IS essential to helping him relieve stress and participate in an outdoor activity like his typically-developing peers.

Ride to Give agrees and wants to provide Stephen with a custom built Blade that will fit him perfectly and will be used for years to come. Our mission at RTG is to turn athletic ability into fundraising power for families with children who are disabled, injured, or ill.  We think Stephen and Erik will make fantastic ambassadors for Team Ride to Give and we can’t wait to see them race for the first time with their new Hoyt Running Chair. Please help us purchase the Blade running chair and accessories for Stephen by making a tax deductible donation to Ride to Give.

Contributions are solicited with the understanding that the donee organization (Ride to Give, 501c3 tax ID 46-2952297)   has complete discretion and control over the use of all donated funds. Questions about how your donation is used can be answered by clicking here.  Please visit Ride to Give on the web at www.ridetogive.com or on Facebook at www.facebook.com/ridetogive.