Thank you everybody. Our campaign is now over. ✕
Ride to Give- Ironman 70.3 for Rockstar Rylee
SubscribeUnsubscribe
✖
Gallery (1) 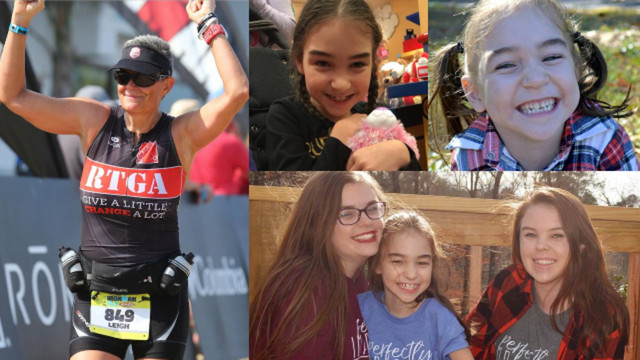 ***On Sunday, May 20th, Team Ride to Give member Leigh Duquette of Santa Clarita, CA will be participating in Ironman 70.3 Chattanooga on behalf of 9-year-old Rylee Sanford of Chatsworth, GA.***

Rylee, the youngest of Ricky & Lisa Sanford's three daughters, was born in August 2008 8 weeks early at 32 weeks gestation. During a routine ultrasound, doctors detected some malformations in Rylee's brain that would need to be addressed. Following her birth, Rylee was sent for extensive testing to look for brain bleeds and other abnormalities.

It was during this testing that Rylee's doctors discovered 2 clefts on her bain and diagnosed her with bilateral closed lipped schizencephaly and cerebral palsy.

Schizencephaly is a developmental birth defect characterized by abnormal slits or clefts in the cerebral hemispheres of the brain. People with clefts in both hemispheres, like Rylee, commonly have developmental delays, delays in speech and language skills, seizures, and problems with brain-spinal cord communication. Treatment generally consists of physical therapy and drugs to prevent seizures.

After receiving Rylee's diagnoses, doctors told Ricky and Lisa she would never smile, never communicate, and never move.  Her parents were devasted and prepared for the long road ahead of them raising a medically complex and fragile child. But through hours hard work, endless prayers, and lots of love, Rylee has proven those doctors so very wrong!

Rylee is homeschooled as her district does not have the classroom appropriate for her level of disability, and receives physical, occupational, and speech therapy weekly. She can not walk or stand without assistance and is entirely dependant on her parents for almost everything. However, she has learned to crawl and can move around the house. In the past year, thanks to a fantastic speech therapist, Rylee's verbal communication has grown by leaps and bounds. Their child, that the Sanfords were told, would never improve, is now thriving!

Children like Rylee have tightness and spasticity in their legs. In 2016, Rylee underwent SPLM (Selective Percutaneous Myofascial Lengthening), a relatively simple and minimally invasive outpatient surgery that is performed under general anesthetic for the treatment of the tight tendons that are found in children with cerebral palsy. The SPML procedure involves releasing tight bands of tendons. This is done where muscle and tendon overlap where a tendon starts to blend into a muscle. The tendon spreads out and is thinner at this location and is called Myofascia. When the myofascia is cut, the muscle under it can easily stretch and lengthen. The word “Percutaneous” in the name SPML means using very small skin incisions 2-3 mm in length, so small that stitches are not needed.

Rylee could increase her movement and leg strength with another  SPML surgery.

Because of her complex medical diagnoses, the best doctor to perform this procedure is Dr.Yngve at the The University of Texas Medical Branch League City Campus. Dr. Yngve has a special interest in cerebral palsy, scoliosis and pediatric spine problems and has made SPML his signature procedure after he saw the impact is made on his own daughter's mobility. Before the SPML she was wheelchair bound and is now walking with a walker. Ricky and Lisa are very hopeful that Rylee will have an equally positive outcome now that Rylee has grown and is stronger overall.

Rylee's Georgia insurance will pay for the majority of the procedure, but they still have to pay about $3000 out of pocket as well as travel expenses. Recently Rylee began having seizures and the Sanfords want to maximize her chances for increased mobility and independence before the seizures cause any extra damage to her brain. But with only Ricky working and two older children, finances are extremely tight, and they have been struggling to find a way to get Rylee back to Texas. They have raised funds in the past to help with other things considered luxuries by insurance, including a special needs van, but returning to Texas has moved to the top of the list.

Ride to Give is impressed with Rylee's incredible courage, her joy for life, and the unwavering dedication her family. We would like to raise the necessary funds to cover Rylee's medical trip to Texas for Dr. Yngve to perform SPML surgery on her legs giving her the best chance to continue to thrive. Please join RTG and Team Ride to Give member Leigh Duquette by making a tax-deductible donation in support of Rylee.